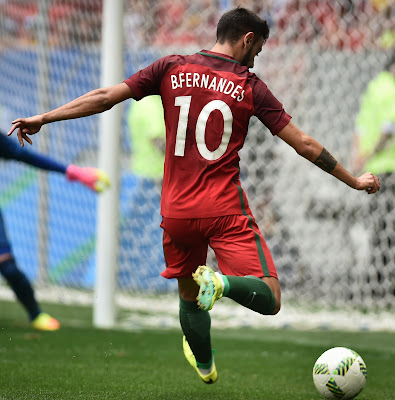 This picture is licensed under the Creative Commons Attribution-ShareAlike 2.0 Generic license. No changes made.
Sporting Lisbon’s Bruno Fernandes has been at the heart of transfer talk since the end of last season. With some of the top Premier League sides hunting for his signature in the summer, the Portuguese side managed to commit Fernandes to a new contract. However, his new release clause has not put the speculation to bed. Manchester United find themselves struggling for creativity at the centre of the pitch and with Paul Pogba’s situation unclear at Old Trafford, could United be willing to pay big money to give Ole more to smile about?
A Nations League winner with Portugal and having broken the record for most goals in a season from midfield, Bruno Fernandes has certainly attracted attention from Europe’s top sides. Sporting’s star recorded 32 goals across all competitions last season but with the Liga Nos side suffering from financial difficulties, reports suggest that the midfielder could be available for €70 million.

Is Fernandes the solution to Manchester United's lack of creativity?
United have struggled in finding space against the lower Premier League sides. These teams sit deeper and commit a lot of men behind the ball, shutting space and thwarting United's attack. The speed of the Red Devils attack is up there with the top of the Premier League but without a creative centre-piece pulling the strings, their counter attacks are easily halted. Fernandes offers the ability to play as either a number 6, a box to box midfielder with the quality to break out from the back and instantly put the opposition on the backfoot. He offers a different dynamic to what can be seen as a slow and unmotivating midfield for United so far this season. Fernandes can also offer himself as a 10 playing between the midfield and attack, a position lending a lot more space in order to control and influence the attack. The number 10 in a 4-2-3-1 formation is able to work within the half spaces and provide a headache for opposition defences such as how Paul Pogba played at the beginning of Solskjaer's tenure. With 26 goal contributions in 24 games for Sporting so far this season, Bruno Fernandes could be the spark that doesn't alter Solskjaer's system but provides the traditional creativity its been missing.

Where does Paul Pogba fit in?
Like with Fernandes, speculation surrounding Paul Pogba will not disappear. Somehow sidelined but still at the centre of attention seems to be a Pogba favourite. Not shy of the cameras, is Pogba a key element of Solskjaer's plans or would cashing in benefit them altogether? If Pogba is to stay then the arrival of Fernandes could change the entire dynamic of United's attack. In a 4-3-3, both Fernandes and Pogba could have the freedom to bring the ball forward whilst having the backrest of a defensive midfielder behind them. This would also allow United's pacey attack, notably Rashford and Martial, to play on the shoulder of the last defender, knowing that there is the quality to cut the opposition open when breaking at pace. Pogba was allowed more freedom when Solskjaer first took over and his performances show that on his day he remains one of the best midfielders in the world. However with Paul Pogba, Europe's top sides never appear to lose their interest. Real Madrid was too good to turn down for Eden Hazard and with Pogba having previously expressed a desire to play under compatriot Zidane whilst failing to make his commitment to the club clear, speculation over his future seems set to continue.
Both are phenomenal on their day. Both could take Manchester United back to the top but will all of it just remain speculation? Still pictured as one of the best clubs in the world, two transfer stories circle around it that will not disappear. It's all up to you, Ole.
Luke Martin Manchester United Premier League Transfers

Michael Lee It was Mark Twain who said truth was stranger than fiction. His argument was that while fiction exists within the realms of possibility, the truth holds no such bounds. It is possible that Twain was part of the crowd in the Jan Breydel Stadium in Bruges to witness the maddest international match of the twenty-first century – Spain verses Yugoslavia at Euro 2000.  In possibly the greatest tournament of the modern era, this bizarre and thrilling Group C encounter really took the proverbial biscuit. The match had seven goals, late drama, one red card, exquisite football, plot twists Hollywood producers would have considered far-fetched and even multiple pitch invaders. Most incredibly of all it cracked a smile on the faces of Alan Green and Mark Lawrenson.  Before tiki-taka and tournament success, it was impossible to encounter references to the Spanish national team without the prefix ‘perennial underachievers’ attached. After an embarrassing group stage exit at F

West Ham's 2003 Relegation Was One Of Football's Biggest Missed Opportunities

Michael Lee A sliding doors moment is a popular term defined as a ‘tiny, seemingly inconsequential moment that can alter the trajectory of future events’. A 2019 survey claimed that 80% of British people have experienced one, although its very nature means we can only recognise one in hindsight. For example, most of our friendships are made through circumstances out of our control, however much we would claim otherwise. Arrive at a destination five minutes before or after you intended and opportunities that seem pre-ordained would not exist. This would seemingly prove that human experience is fragile and largely reliant upon chance. This applies equally to football, a sport overflowing with ‘what-if’ moments. What if Eric Cantona rejected a move to Manchester United to stay at Leeds? What if Harry Kane had squared to an unmarked Raheem Sterling against Croatia? What if Arsene Wenger had signed a fraction of the players he has subsequently claimed he was interested in? Supporter