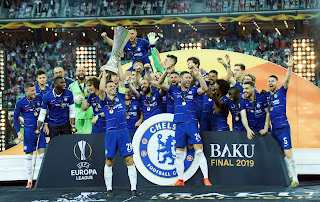 Chelsea aimed to find some consistency against Steve Bruce's injury stricken Newcastle but pulled up short, conceding a sickening stoppage time goal from Isaac Hayden. With Chelsea's transfer ban having been lifted, the Blues do have the ability to spend this month. However Frank Lampard states he is only willing to bring players in to the club if they have the ability to add to the current squad.
Following the defeat at St James’ Park Chelsea remain fourth in the Premier League table, but failed to extend the gap between themselves and fifth place Manchester United. Solskjaer’s Red Devils are just five points off the Londoners and Lampard will surely be taking a look behind as his side once again fail to find consistency.
Like Manchester United, the Blues have found it hard to break down sides that defend more deeply against them. Having lost to West Ham, Bournemouth and Southampton in recent weeks at Stamford Bridge, Chelsea have lacked creativity in their attacks. Willian and Pedro are now both on the wrong side of thirty and despite still having the ability to influence games, consistency in the wide areas is a factor that has been missing at Stamford Bridge throughout the campaign. Rumours have surfaced surrounding Jadon Sancho, however in Christian Pulisic and Callum Hudson-Odoi Chelsea have the options in order to avoid splashing the cash this month. With Pulisic joining in the summer from Borussia Dortmund and Chelsea remaining firm amidst Bayern Munich’s interest in Hudson-Odoi, both have a lot to prove and deserve the chance to do so.
Lampard’s philosophy, whilst the transfer ban was imposed, forced him to turn his attention to youth and there’s no reason why this cannot continue. The lifting of the ban gives the Chelsea manager the option to explore, however there is no need to panic buy as Chelsea have adequate depth across the pitch. Despite this, an overreliance on these players may lead to greater scrutiny and unnecessary pressure which could be damaging in the long term. This was the case in the 2-0 home loss to Southampton on New Year’s Day with Callum Hudson Odoi being targeted by certain segments of the fan base on social media. Obviously these critics are in the minority but in the modern age these fans have a much greater voice through social media platforms and can have an increased impact on a players confidence.
If Chelsea harbour ambitions of reaching the new benchmark set by Liverpool and Manchester City maintaining this youthful spine will be important, but improving the overall quality of the squad is also necessary. A move for Sancho this month has been ruled out but should the opportunity arise in the summer you’d expect Lampard to pursue it.
One of the most successful aspects of Lampard’s focus on youth has been the form of Tammy Abraham. Many doubted whether the Englishman could make the grade in the Premier League having moved around the Championship in loan spells at Bristol City, Swansea and Aston Villa. The Englishman has started the season well and has 13 goals in the league, however concerns loom over the reliance on the academy graduate. Olivier Giroud looks set to leave and Michy Batshuayi has been uninspiring in his performances off the bench. The issue remains for Lampard to find a back-up striker who he can trust if Abraham were to get injured. Abraham’s form has dipped in recent weeks and with the close of the January window coming ever closer, will Lampard tap into the bank for the support he needs? Chelsea are reportedly interested in Moussa Dembélé of Lyon but with  Depay and Reine-Adélaïde facing months on the sidelines for the French club, an already unlikely January move seems all the more distant. Abraham’s goals drying up are as much to do with the team rather than the striker himself. Given chances he will score goals, he is unlikely to decide the game with a moment of individual brilliance but as part of a creative and fluid attack he is a prolific goalscorer. It is clear that more competition is needed up front but his lack of goals should not be to blame for Chlesea’s inconsistency.
Considering the mood around the club at the start of the season Chelsea are well positioned in the table and are through to the last 16 in the Champions League. Big names such as Manchester United and Arsenal have not performed admirably thus far but Lampard’s rebuilding process is beginning to take shape and there are many positives to take from the start of his tenure. With winter arrivals looking increasingly unlikely it looks like the current squad will have the task of trying to rediscover their consistency. However, in the summer window new arrivals will be needed to help the team reach the next level. This does not mean abandon the youth policy, but incorporate them into a higher quality team which will undoubtedly help their development. This may damage the club’s somewhat recovered reputation amongst neutrals, but Chelsea fans won’t care.
Thumbnail: This file is licensed under the Creative Commons Attribution 4.0 International license.  Attribution: President.az
Chelsea Luke Martin Premier League Transfers