Firebombing the prom: How Mourinho ended football’s romance era, and how we all deleted the memory 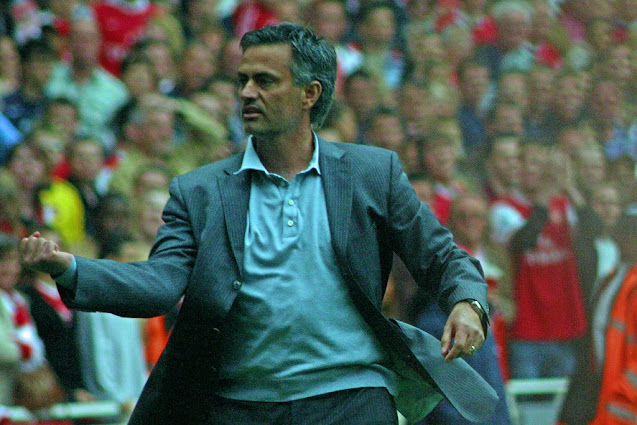 Jose Mourinho, whether you love to hate him or love to love him, is one of the Modern Game’s greatest characters. Like all football’s great personalities, his career has seen him walk (by which I mean swerve violently between extremes either side of) the line between genius and madman. Sometimes he leads like JFK, sometimes Idi Amin, sometimes Tommy Shelby, sometimes David Brent. Whatever mode he’s in, he’s ceaselessly entertaining, making him architect of a plethora of iconic moments.
Alongside famously declaring himself a ‘special one’ at Chelsea, there have been many footballing triumphs, for instance winning the Treble with Inter Milan and only conceding 16 league goals in his maiden season at Chelsea. He also celebrated pointedly obnoxiously away at Old Trafford when he was Porto manager. He also celebrated pointed obnoxiously at the Nou Camp when he was Inter manager. He also celebrated pointed obnoxiously away at Juventus when he was Manchester United manager. The last instance marked his irrepressible self-belief most impressively, coming just a month before he would be sacked with his side sat sixth in the Premier League.

A recent Bleacher Report article fairly pointed out that one event seems unjustifiably absent from most people’s perceptions of the enigma’s greatest hits: his 100 point 2011/12 seasons with Real Madrid. Never had this pantomime villain pooped a party so potently, and (as the aforementioned article overlooked) with such potentially wide-ranging consequences for the sport. Football may have forgotten for the same reasons that one may suppress all memory of a sharply dressed Portuguese man sprinting into view to cut your first kiss short with a high-foot to your lover’s temple. Unfortunately, I’m a realist and I’ve come to reignite the pain.

The year is 2010. Everyone you know seems to be getting made redundant and the Eurozone is on the brink of collapse. Fortunately, you’re blissfully unaware of the news because you remain deafened by that summer’s vuvuzela pandemic.

Most importantly, Spain, Barcelona and Pep Guardiola’s Tiki-Taka tactics are dominating the, at this point genuinely, beautiful game. ‘Likable’, ‘humble’ and unathletic stars are blowing teams out the water with football that is both entertaining and ruthlessly effective. Pep has developed Mufasa-like status as an uncomplicated symbol of all that’s good and righteous presiding over the entirety of football. This pure approach seemed to mark the beginning of a glorious new epoch for the jungle, being copied as far as Wigan and South Wales. This was all to be prematurely snuffed out however, when Real Madrid announced they had appointed Uncle Scar as head coach, squaring off the circle of life by introducing death to the equation.

Madrid were lost when Mourinho came in. Their Simon Cowell approach to recruitment, attempting to build success through marketable and charismatic individuals whose actual talent was of secondary importance, had failed. One last big push for the Galacticos strategy saw them acquire Cristiano Ronaldo, Kaka, and Karim Benzema the summer of 2009. However, despite coming close, they remained unable to beat a Barcelona side with the athletic composition of a bottom-set P.E class, forcing them into a long overdue existential crisis. Back in 2003, Zidane had famously compared the club’s decision to sell Claude Makélélé and buy David Beckham to putting another lick of gold paint on the Bentley when you’ve just sold the engine. In 2010, they finally got the message, giving football’s greatest pragmatist executive license to trade the vehicle for a Ford Mondeo.

Jose’s first season was not an overwhelming success. The man secured some important victories, winning the Copa del Rey and making a valiantly literal attempt to thwart Guardiola’s vision by poking his assistant, Tito Villanova, in the eye. The overall story was, however, one of failure; finishing second and falling victim to a famous 5-0 drubbing at the Nou Camp.

Everything clicked in the second season though. Providing the most compelling evidence to date against Kantian notions of inherently linear, progressively lovely history, Mourinho’s men kicked, elbowed and dived their way to 100 points and their first league title since 2008. This was not simply a tale of mastery of the dark arts, however. It was perhaps the best example of Mourinho’s ability to galvanise individual talent.

Jose brought a career best tally from the engineer’s choice for greatest player of all-time- Cristiano Ronaldo/Robocop- who executed 46 stunningly efficient league goals. His moving Sergio Ramos from the right to the middle of the back 4 was also a stroke of genius, allowing his studs to follow the opposite number 9’s knees all the way around the final third. Most remarkably, he completed this trifecta of achievements by making Mesut Özil thrive in a defensive system. Maximising the talent at his disposal, Mourinho wedged a team featuring Sami Khedira and Alvaro Arbeloa above one of the greatest club sides of all time.

A quick look at whoscored.com shows he did it whilst underperforming Barcelona on possession, successful dribbles and shots per-game. They did, crucially, better their Catalan enemies for tackles, yellow cards and aerial duels. In summary, force had triumphed over finesse.

Despite the miraculous nature of this achievement, it is rarely discussed amongst the Special One’s greatest conquests. This could be explained by its lacking huge significance in his own career, with his tenure at Madrid unravelling spectacularly the following season.

However, in the (more important) broader context of world football, it may have been greatly meaningful. That season marked the end of Tiki Taka’s parallel domination of club and international football. Spain won the last of their 3 successive major tournaments that summer and Barcelona have only won one Champion’s League since despite having won 2 of the previous 3 at the time.

Guardiola has stayed at the top of his game but only through adaptation. At Barcelona he neglected wings more vigilantly and absolutely than Greta Thunberg eating a vegan lunch on the boat to America, employing wide-men (Villa and Pedro) with the combined speed and strength of Pingu post-exposure to a hairdryer.

At Bayern Munich (and subsequently in his best spell at city) he did a complete 180 on this, infusing his football with the Blitzkrieg mentality of his new home by employing rapid wingers playing on the sides of their strong feet to service his forwards. Whilst parking the bus didn’t become the new zeitgeist, we did see a restoration of tactical pluralism. Perhaps the only consistent thing was the dominance of a high-pressing game, something Mourinho has failed to implement to his detriment. This style does, however, require a degree of athleticism which it briefly appeared Guardiola, with his romantic team of artists, had exiled to the realm of more barbarous sports. This season should have been viewed as the first great sign he had not.

The autopsy in a nutshell.

Whilst football fans around the world were enjoying Romeo and Juliet, Mourinho cut the play short by reversing the back wheels of a double decker over the star-crossed lovers. Given the abruptness and significance of this episode, it’s near total airbrushing out of the sport’s history seems bizarre. It may be for the best, for the sport and its fans, but I- a bastard- intend to resurrect the trauma. Enjoy your Post-Mourinho-Stress-Disorder.

Thumbnail: Attribution - Ronnie McDonald. This picture is licensed under the Creative Commons Attribution 2.0 Generic (CC BY 2.0) license. No changes made.