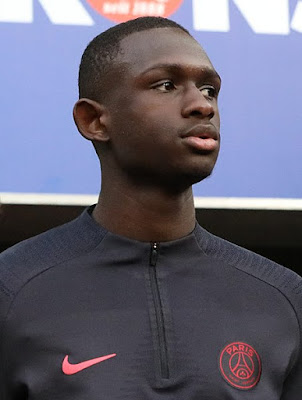 Tanguy Kouassi, the young multifaceted French centre-back/midfielder was picked up by the Paris Saint Germain academy in 2016, at 14 years old. Hailing from Épinay-sur-seine in the north of Paris, this is an opportunity many of his compatriots would dream of. Yet, it appears Kouassi may have had other plans in mind.

Winning the Titi d’Or in 2019 for the most promising talent in the PSG academy, Kouassi quickly broke into Tuchel’s first team plans making his debut from the bench later that year away at Montpellier, coming on for an injured Idrissa Gueye. It didn’t take him long to get on the score sheet either, scrambling a loose ball in at Reims just a month later. But it wouldn’t be until the following month, in February 2020, that Kouassi would really show Les Parisiens what he was all about. In a thrilling 4 all draw with later relegated Amiens, Kouassi earned himself a 9.1 rating, winning 6/6 aerial duels and even scoring twice.

With a handful of exciting appearances under his belt, his place at the club seemed more than secure. Particularly with the departure of club legend Thiago Silva, Tuchel’s side are in need of solidarity in the middle of the defence for next season. Promising a long term future at the club, the French giants proposed an offer most 17 year olds would die for.

There has been a lot of speculation into why he would turn down the offer but with his contract ending on 30th of June 2020, what really matters now is, what next for Paris’ pépite? And what does this say to other young Frenchmen on the seemingly endless conveyor belt of talent in the +33?

Quite unsurprisingly, as soon as news of Kouassi’s availability spread around, the usual suspects were raring to swipe his signature. Despite interest from the likes of Manchester City, RB Leipzig, Borussia Dortmund and others, Kouassi is set to sign a five year deal with Bayern Munich. Becoming the 6th Frenchman on Die Roten’s books, along with: Mickaël Cuisance, Lucas Hernandez, Kingsley Coman, Corentin Tolisso & Benjamin Pavard. All of which are under 25 years old and, 3 with World Cup Winners medals at home. With players such as: Alaba, Boateng, Sule and Kimmich occupying his preferred roles on the field, it doesn’t seem likely Kouassi will be getting too much game time next season.

Embed from Getty Images
Kouassi will join a Bayern Munich side filled with French talent.

Yet, a loan move may be on the cards for the Parisian still and this may be a decision that shapes his career. Though promised game time back home in Paris, it is unlikely he would’ve started ahead of Gueye, Marquinhos or Kimpembe. Meanwhile, a loan to another outfit, in a higher quality league than Ligue 1, such as the Bundesliga could be a lot more beneficial and give Kouassi the necessary experience to fight for his place on a return to the Allianz Arena at some later date. This would echo David Alaba on his arrival FCB as the Nigerian-Filipino-Austrian was loaned out to Hoffenheim before his breakthrough season at Bayern, winning 8 Bundesligas and a Champions League since.

Kouassi’s fate is in the hands of few, but what does all this mean for the other talent at PSG? Furthermore, what effect could it have if Kouassi sees a fruitful return for his choice? In the wake of Kouassi’s bold decision, highly rated 17 year old Adil Aouchiche has also turned down a pro contract with Les Rouge et Bleu. The 2019 U17 Euros top scorer has chosen to follow in his former teammate’s footsteps despite public pressure from Kylian Mbappé to put pen to paper. With a habit of making big money signings, Presenel Kimpembe is the only notable academy player seeing a long term home at the Qatari backed club.

Embed from Getty Images
Kouassi alongside the world's most expensive player Neymar, who cost PSG €222m. Kouassi will leave for free.

It appears Paris’ young are now seeing no way into the first team at PSG and this could be a tell-tale sign to the ultimate downfall in the French capital. With some of the most exciting talent in Europe preferring to play football outside of France, it could be very detrimental to PSG’s annual Champions League effort. Furthermore, if Kouassi and Aouchiche are to see considerable returns for their services elsewhere this will only draw the next generation away from Paris. Possibly, even seeing PSG quietly become a feeder club to the traditional European powerhouses whilst plastering the holes in their squad with the ludicrous supply of money allowing them to acquire players like Neymar, Icardi and so on...

Whether in Paris, Munich or elsewhere, it will certainly be interesting to see the players that Kouassi and Aouchiche mature into.

Michael Lee It was Mark Twain who said truth was stranger than fiction. His argument was that while fiction exists within the realms of possibility, the truth holds no such bounds. It is possible that Twain was part of the crowd in the Jan Breydel Stadium in Bruges to witness the maddest international match of the twenty-first century – Spain verses Yugoslavia at Euro 2000.  In possibly the greatest tournament of the modern era, this bizarre and thrilling Group C encounter really took the proverbial biscuit. The match had seven goals, late drama, one red card, exquisite football, plot twists Hollywood producers would have considered far-fetched and even multiple pitch invaders. Most incredibly of all it cracked a smile on the faces of Alan Green and Mark Lawrenson.  Before tiki-taka and tournament success, it was impossible to encounter references to the Spanish national team without the prefix ‘perennial underachievers’ attached. After an embarrassing group stage exit at F

West Ham's 2003 Relegation Was One Of Football's Biggest Missed Opportunities

Michael Lee A sliding doors moment is a popular term defined as a ‘tiny, seemingly inconsequential moment that can alter the trajectory of future events’. A 2019 survey claimed that 80% of British people have experienced one, although its very nature means we can only recognise one in hindsight. For example, most of our friendships are made through circumstances out of our control, however much we would claim otherwise. Arrive at a destination five minutes before or after you intended and opportunities that seem pre-ordained would not exist. This would seemingly prove that human experience is fragile and largely reliant upon chance. This applies equally to football, a sport overflowing with ‘what-if’ moments. What if Eric Cantona rejected a move to Manchester United to stay at Leeds? What if Harry Kane had squared to an unmarked Raheem Sterling against Croatia? What if Arsene Wenger had signed a fraction of the players he has subsequently claimed he was interested in? Supporter